Let’s get right into this gorgeous and mouth-watering lemon tarragon butter lobster roll —but first a walk down memory lane. When I think about the one dish that really puts summer into full swing for me it would have to be a classic warm lobster roll. In my opinion, it’s an American classic and really makes it feel like summer. I remember all the special places I’ve had really great lobster rolls. From smorgasbord in Williamsburg, Brooklyn to the famous Nancy’s on Martha’s Vineyard, lobster rolls are my jam. The only question to consider when having a lobster roll is do you want it warm or cold?

Personally, I’ll take a lobster roll any way I can get it, but if I had to choose, I would get a warm lobster roll slathered with the best butter money can buy. I enjoy the cold lobster rolls, but I just think the lobster shines so much more when it’s warm and served with butter on a toasted roll. Lobster is already a pricey indulgence so I want to make sure I prepare in a way that will make it the star of the show.

When my friends over at FoodSaver asked me to make an American classic dish to celebrate the start of the Olympic games, lobster rolls were the first thing that came to mind. Not only are lobster rolls delicious but they give me special occasion vibes. The summer Olympic games are a time where nations come together to compete and above all, celebrate. In honor of the Olympics, I decided to make my very first homemade lobster roll using my FoodSaver VS3182 and Preserve & Marinate Containers to help lock in freshness and seal in flavor. The recipe came together in a snap and the I was enjoying my delicious homemade lemon tarragon butter lobster roll in no time.

By the way, in case you were wondering who created lobster rolls, according to the “Encyclopedia of American Food and Drink” the lobster roll originated as a hot dish at a restaurant named Perry’s in Milford, Connecticut, as early as 1929. Its popularity then spread up and down the Connecticut coast.

Well, I think I’ve done enough talking to convince you to try this recipe and grab a FoodSaver Preserve & Marinate Container to help you flavor your food in minutes. You can get 25% off by using promo code NATASHA25.

If you make this lobster roll recipe be sure to tag me at @asiliglamcooks on Instagram so that I can re-post it. 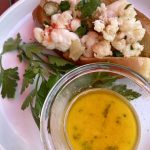 Thanks to Foodsaver for sponsoring this post, all opinions are my own.

You may also enjoy: